Born on the 19th of September 1980. Linda ikeji is a Nigerian blogger, entrepreneur and writer of who hails from Nkwerre in Imo State. She is the second child of her catholic parents.

Linda Ikeji finished high school at age 17 and got admitted into the University of Lagos at age 18 to study English Language.While in school she did some part time jobs like writing, modeling and working in hotels as a waitress in order to help herself and her family.

Linda’s career started as a hobby in 2006 which is two years after she graduated from the University. She would post from the cyber café because the internet wasn’t popular in Nigeria at that time. In 2007 her blog became active using a sub domain lindaikeji.blogspot.com, and after a while she obtained her own domain (www. Lindaikejis blog.com). 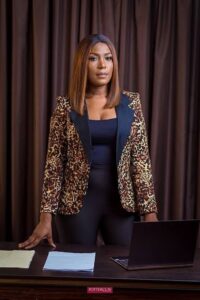 She had since worked on several projects like the creation of her Linda Ikeji online tv in august 2016 which airs a variety of programmes ranging from reality shows, tv Series to talk shows and movies. The creation of online radio broadcasting which operated from the Linda Ikeji media office and some of its programmes are broadcast live on Linda Ikeji tv.

Linda Ikeji launched a music platform in 12th November 2016 which became dormant after 3 months. She went ahead to launch a social networking platform she named Linda Ikejisocial on lindaikejisocial.com. She also runs a non-profit project themed “i’d rather be self made; no thanks “ which she assists young girls aged 16-25 who have great business ideas and are willing to journey into the world of entrepreneurship as revealed by her during an interview with hip tv. In the first phase of this project she gave out the sum of NGN10,000,000. In 2016 Linda Ikeji joined the house owners train as she moved into her million dollar house, a feat that was celebrated by many  Nigeriansespecially the female gender.

Ikeji was said to have been engaged to her one time ex boyfriendin the early months of the year 2017 and two months after, her sister made it known that she was pregnant, a news that was frowned at by her fans who thought she did what she preached against. On the 17th of September 2017 she had her child. She later disclosed that things didn’t work out between her and her son’s father Sholaye Jeremy as they are not suitable for each other. She took to her blog to explain her reasons.

In the year 2014 on the 8th of October Linda Ikeji’s blog was shot down for undisclosed reasons and was restored two days later on 10th October. She has dealt with controversial posts which like the savemayowa campaign and about celebrities. In 2018 theonline editor for the punch newspaper John Abayomi threatened to file a lawsuit against Linda for untrue story about him being the owner of instablog9ja. As the post put his and the life of his family at risk. She also made controversial publications about politician Doyin Okupe who referred to the post as a defamatory one.

In 2012 Forbes Africa profiled 20 African most prominent women and Linda Ikeji was one of the two from Nigeria. On 8thAugust 2018 she was among the eminent personalities drawn from different countries across multiple disciplines who were conferred with honorary doctorate degree from trinity international university in Georgia for outstanding job in business and media in Africa. In 2020 her name was the most searched item by google users In Nigeria.

Conveying News, Entertainment, Culture  and Education Round the world.

History and Origin of Diamonds

HOW TO KNOW THE PERSON YOU ARE DATING IS CHEATING

Should A Born Again Christian Look Sexually attractive in Public?

Did mary have other children after Jesus?

Did mary have other children after Jesus?